It is true that each tribe in Nigeria has its own special food unique in its own taste, colour and ingredients, but when it comes to one particular soup in Nigeria which is the popular Edika ikong soup, everyone can testify about it. This soup is tasty, unique, enticing, irresistible, colourful, flavourful, nutritious and loved by many.

In most popular restaurants, edika ikong stands as the best choice for clients, for visitor in Nigeria; edika ikong serves as a welcoming surprise to them, for newly married couple, the soup serve as a secret of happiness. For women that recently put to birth, edika ikong soup helps to generate lost blood and support proper lactation, for kids suffering from malnutrition; edika ikong speaks for them by helping to increase blood flow and also for the elderly one, edika ikong helps in slowing down ageing process and eliminates -stress. There is more to say about this soup.

Edika ikong soup, is of great benefits to everyone and everyone loves the soup because it contains some of the nutritional health benefits such as:

Fresh ugwu and water leaves for the preparation of edikaikong soup

Edika-ikong soup (vegetable soup) is a popular traditional dish, which is well known among the Efik (Calabar) and the Ibibio (Akwa-ibom) people in Nigeria. “Edikan ikong”or Edika ikong as the name implies is a very nutritious soup commonly prepared during special ceremonies such as traditional wedding (Ndo) Ordination, funneral, Dedication, Festivity, etc. Edikaikong is usually nicknamed as “The King Soup” because it is mostly prepared for the Kings. This is as the result of the many ingredients and the procedures involved in its preparation. It is commonly prepared using large quantity of pumpkin leaves (nkong ubong or ugu), waterleaf (mon mong ikong or Talinum Triangulare), Goat meat or beef, cow hides, palm oil, with large quantity of crayfish among other ingredients

Ingredients for the preparation of edikaikong soup 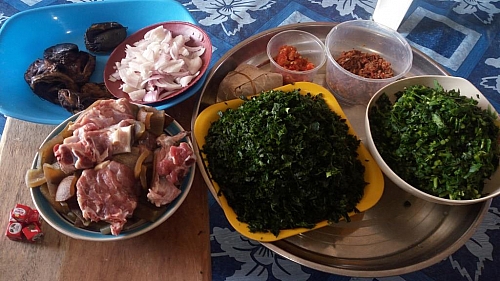 Some ingredients for preparing edikaikong soup

Just before the preparation of edikaikong soup

The procedures for preparing of edika ikong soup is quite similar to that of Afang, editan and abak tama un-like afia-efere and egusi soup which aretotally different and faster. Since enormoussoups like these, require much time procedures. Certain things need to be done before the main cooking which would make it faster and easier. The following are the things that should be kept in place before you start cooking edikan ikong soup.

Steps on how to prepare edikan ikong soup

1. Season and cook meat until it becomes soft; when the meat is properly cooked, add the shredded water leaves into the pot containing the meat, measure 2 big spoons of palm oil and add too. Leave it to simmer for 5 minutes. 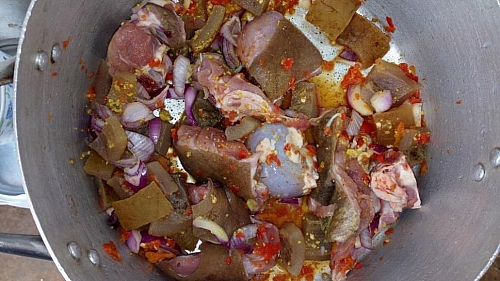 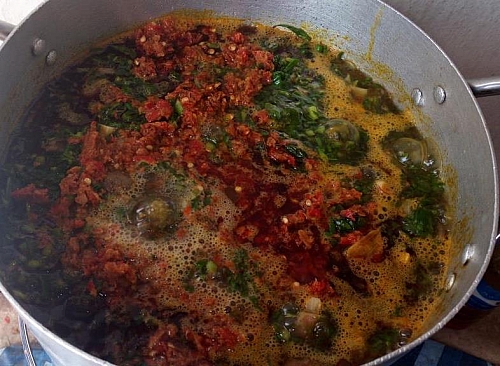 Cooking process of edikaikong soup- water leaf naturally has water in itself, do not add much water to the content, the water will come up as the leaf boils

3. Add dried fish to the content, but do not stir the soup too much, so that fish don’t get broken completely. 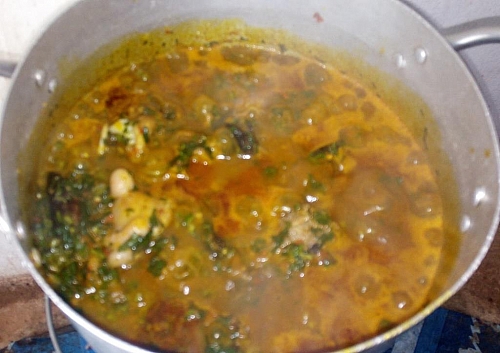 4. Once the soup has simmer for 5 minutes, add the pumpkin leaf and stir the soup properly, and do not cover the pot, just allow it to simmer on a low heat for just a minute. 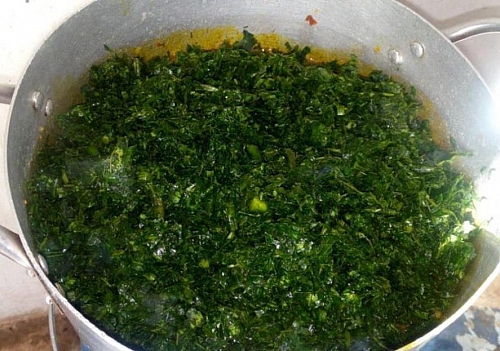 Fluted pumpkin (ugwu leaf) is being added to the content 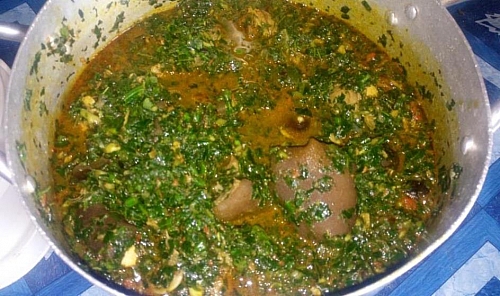 Edikaikong soup is about to be served

5. Taste the soup and adjust the necessary seasonings.

A plate of delicious edikaikong soup

6. Put off the heat and serve your edikaikong soup with fufu, semolina, alebo, eba (garri), etc. 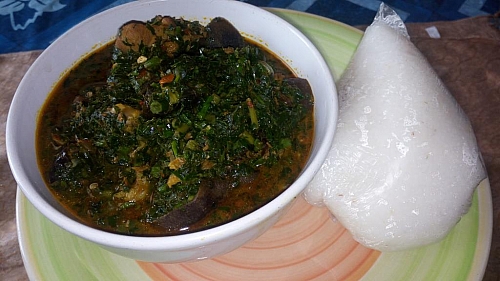 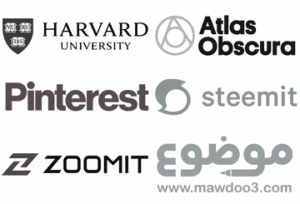